Earlier this week, Heidi and I presented our program “All Things Kaffe” to the Pine Tree Quilt Guild here in Grass Valley. We talked a bit about his life, showed two short videos, then presented a trunk show of our quilts and wearables that feature his fabrics. We had so much fun, and our audience was wonderfully responsive.

Some of you are in the guild, so we hope you’ll forgive us for reprising a bit of our program in this post and next week’s, when it’s Heidi’s turn. Did you know . . . ?

Kaffe was born in San Francisco in 1937. His great grandfather was a U.S. Senator, and his great-great grandparents founded the Crocker Art Gallery in Sacramento. Kaffe earned a scholarship to the Museum of Fine Arts School in Boston but left at 19 to go to London to paint. On a visit to a wool mill in Scotland with Scottish fashion designer Bill Gibb, he fell in love with the colors and textures of yarn, and on the train going home, a fellow passenger taught him to knit. His first sweater design was published by Vogue, and from there he went on to collaborate with Gibb and Missoni to create colorful, intricately patterned sweaters that make the leap from handcraft to high fashion. 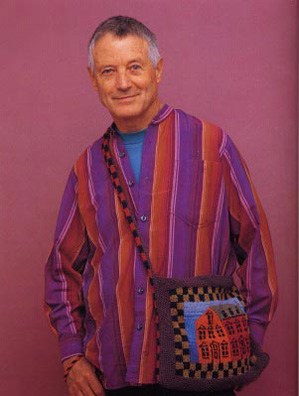 In the mid 80s Kaffe began his love affair with needlepoint, called “tapestry” in the UK. He also created stunning mosaics inspired by his extensive travels. In 1988, Kaffe became the first living textile artist to have a one-man show at the Victoria & Albert Museum in London. Now that’s impressive!

In the 90s, he teamed up with Liza Prior Lucy to create and market colorful prints, woven stripes, and shot cottons for quilters. Two other designers, Philip Jacobs and Brandon Mably, produce many of my favorite fabrics under the umbrella of Kaffe Fassett. Check out the Kaffe Fassett Collective on Facebook—there are more than 19,000 members. Heidi and I love to post there and have made friends from all over the world.

I’ll never forget my introduction to his fabrics: In the early 90s, I bought a yard of gorgeous hand-dyed fabric at PIQF. I turned the corner to another booth and spotted a woven stripe by Kaffe. Here’s a scan of the vest I made from those fabrics, in an article I wrote on color for Threads magazine:

I recently decided to sort my Kaffe prints into stacks, more or less by color. I have at least a dozen stacks, including one that’s labeled “dull and dreary” (they have their place, too). It’s not very tidy, but it works for me. 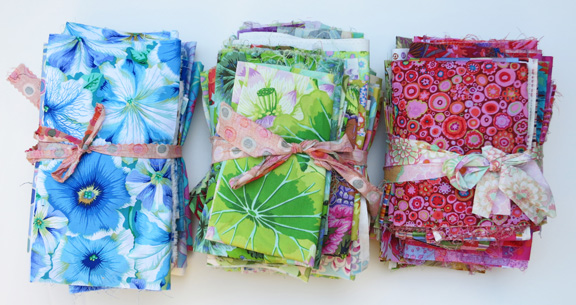 I have three (yes, three) IKEA cubes filled wth Kaffe stripes, and as odd as it sounds, I organize them by how recently I’ve acquired them. Here’s one cube, looking down into it

Almost all of my quilts made from his fabrics have been in past posts, but here’s one I made early on, “In & Out,” using many of his stripes and a variety of light-value batiks. I sent a pic to Liza, she forwarded it to Kaffe, and he emailed me, saying he “liked the way I used his fabric in fresh new ways.” That made my day! 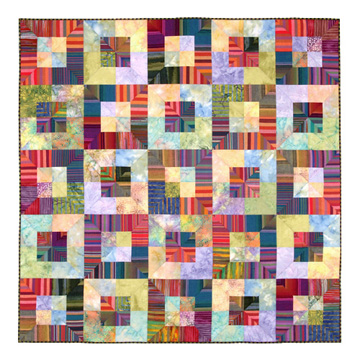 Below are two “Japanese X and Plus” blocks. I challenged myself to make them all in Kaffe, Brandon, and Philip fabrics, except for the background. It was a challenge to gather four medium values for the X and two darker values for the “plus,” but what fun I had!

These are just two of the vests I’ve made using his stripes and prints.

In this vest I used his “Turkish Delight” print for the left front, and a leaf print in the upper area of the right front.

I love to combine his prints and stripes with Gelato ombrés. This is a block for a quilt I never finished. Someday . . . .

Finally, I just had to show you the quilt started by student Joanie in my “Swizzle Sticks” class at Sugar Pine Quilt Shop last weekend. It’s all Kaffe—prints, shot cottons, and stripes—and they all came from Sugar Pine. (Aren’t we lucky?) I’ll show you the quilt when it’s finished (there will be sashing). Thanks, Joanie!

I hope you enjoyed these fun facts about Kaffe Fassett. For more about him and his work, check out his official website. To get an idea of the scope of his fabrics, visit his online store, www.gloriouscolor.com. Tune in next time and let Heidi continue the story with his stunning knits and her own wearables made of his fabrics. Until then, make time to create . . . perhaps with Kaffe?