Summer greetings, AA followers! If you saw my last post, you may remember the blocks I was working on for my next quilt. They feature mostly solids, with patterned center squares. I inserted “swizzle-stick” borders to add a bit of color and sparkle to two of the blocks, below. 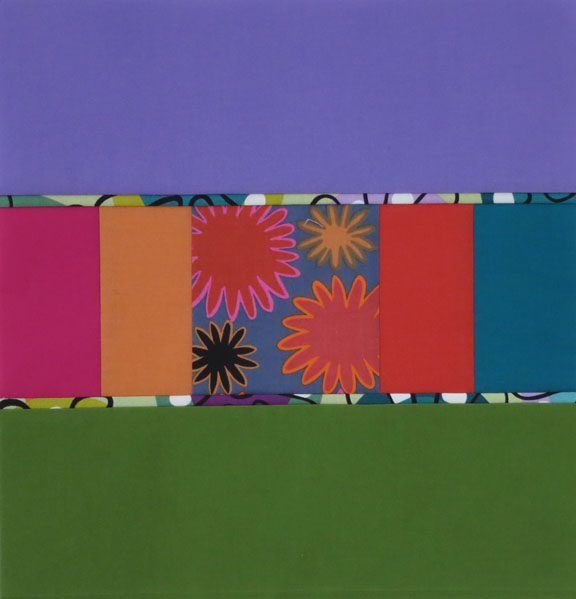 In this block, the gray-and-white polka dot fabric looks like a stripe.

I decided to add sizzle-stick borders to a third block, below. This white-and-black fabric is a companion to the Kim Schaefer print in the center.

Then it was time to think about how to space out the blocks. I’ve never been a big fan of sashing in traditional quilts—I prefer the patterns formed by block-to-block designs to sashing between blocks. But I’m learning to love sashing, as you may have noticed in my “Brushed Metal” quilt. Wider sashing puts the focus on the blocks, and when the sashing is lighter in value, it recedes.

I love, love black-and-white polka dots, so of course I had try a dotted fabric, below. (BTW, the colored squares above my design board are painted on the wall. It’s a long story. . . .)

But right away my eye went to the seam where the dots blend into one black blob. I measured the repeat pattern and realized there was no way I could avoid chopped-up dots. Adding cornerstones to the sashing seemed like a good idea.

I found a wonderful smaller-scale black-and-white dot at The Cotton Patch in Lafayette, CA. But these gray-and-white cornerstones made the quilt look flat, with no sense of depth

I got brave and decided to try black-and-white four-patches, below:

I like the single chain the four-patches imply, but they seem a bit large. If I go with this option, I will align the dot design, to suggest that the pattern flows beneath the blocks.

Next, I decided to simplify the design with this funky-flower print, one of my all-time favorites. Just like the large polka dots, the pattern is chopped up, but when the design is this random, it isn’t as noticeable. And now, the blocks appear to be suspended above the background, an effect I really like.

We’ll be doing plenty of auditioning in my Artistic Alchemy workshop, “Luminosity and Luster: Playing with Color and Light.” There’s simply no way to predict how colors and patterns will interact until you cut them up and make mock-blocks. It’s an eye-opening process, and I promise you’ll soon become a convert to this way of working.

I’ve had a love/hate relationship with plain solids for years. They seemed dull, and patterned fabrics seemed to die in their company. The two exceptions were hand-dyes from Cherrywood (they look sueded) and shot cottons from Kaffe Fassett (with different-colored warp and weft threads, they look almost iridescent). With the exception of those fabrics, I shied away from solids.

But with the advent of “visually delicious” plain solids from a number of companies—Moda, Robert Kaufman, Clothworks, to name a few—my rocky relationship has turned into infatuation. I never thought I would feel this way, but I’m crazy about solids!

I wanted to develop a third version of my “Brushed Metal” quilt (you saw the first two colorways in earlier posts). I began by taking stock of what I had in the way of solids. Not enough, of course, so I headed to a local shop for more. To make the design process easier, I cut strips from all the possibilities and pinned them to my design wall. I love this approach because once you cut everything, knowing that you may need to cut more, assembling the blocks goes quickly. I like this image—it looks like “color DNA” to me. 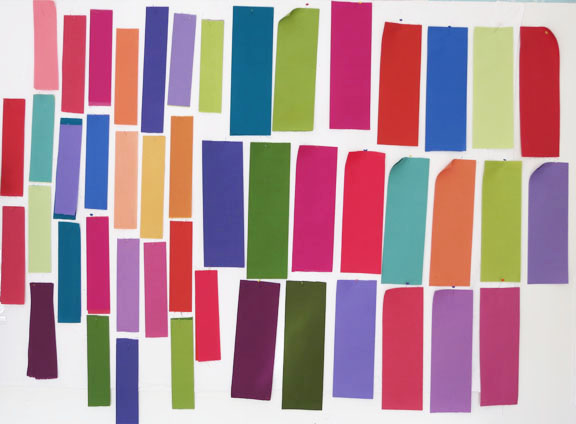 My plan was to create blocks that featured a center print surrounded by narrower and wider rectangles of color. This funky-flower print is by Kim Schaefer.

I didn’t try to match the colors in the prints and solids—you’ll make yourself crazy doing that. But I chose solids that had something in common with the center fabric. The far right strip is red-violet, for example, while the violet in the print is a truer violet. These differences make the block richer and more original.

Here’s the same combination of solids, with a gray-and-white center. Love those neutral dots!

From there I moved on to a block with “swizzle stick” borders, my term for skinny strips. I have a simple method for inserting these strips without the “unpleasantness” of bulky seam allowances. (Notice that the skinny strips are from the same Kim Schaefer print as the first block.)

If you’ve seen my quilts, you know that I have an ongoing love affair with stripes. This Kaffe Fassett stripe fit perfectly into the block design. It also gives this very symmetrical block a bit of asymmetry.

Moving right along—can you tell how much fun these blocks were to make?—I combined a wavy stripe with solids. Again, I didn’t attempt to match colors in the print and the solids, but the colors are related.

Then I had to try the block with the wavy pattern running vertically and with skinny strips from the gray-and-white dot. When I cut the strips, I centered the white dots to create the illusion of a striped fabric. I like the crispness the skinny strips add to the block.

I have no idea which blocks I’ll use in the quilt—there are more combinations waiting to be discovered. But I do plan to use nine blocks and set them with sashing strips and cornerstones. To give you an idea of the design, here are four of my favorites, with that gray dot as cornerstones:

I’m still searching for a light-value sashing fabric, not too light, not too busy. I’ll show you the finished quilt when I find the perfect fabric. Until then, consider plain solids and patterned fabrics—it’s a winning (and colorful) combination!

p.s. This basic block works beautifully for luminosity and luster, the focus of my retreat workshop.