I’m guessing most of us have a bin or space on a shelf for fabrics and pieces left over from past projects. Too good to toss, we keep them, thinking they’ll speak to us another time. Several years ago I made this simple vest of pieced squares and appliquéd circles cut from ombrés. (I had no idea that I would one day become an ombré-aholic.) I intended to embellish the circles, but you know how that goes.

When you appliqué circles, you usually cut away the fabric from the back to reduce the bulk. I call these circles “bonus circles,” and ones from this vest were way too cool to throw away. So they sat in a special place, waiting to be used.

Another project that’s been sitting on my shelf are units/blocks based on my “Luminaria” pattern (scroll down in my Store). I took 16 units made from Painter’s Canvas fabrics by Michael Miller and auditioned them as four trial blocks. I thought of my circles: why not try them in the centers?

That day I passed by my studio, looked in at my blocks and ombré bolts, and said to myself, “color therapy!” 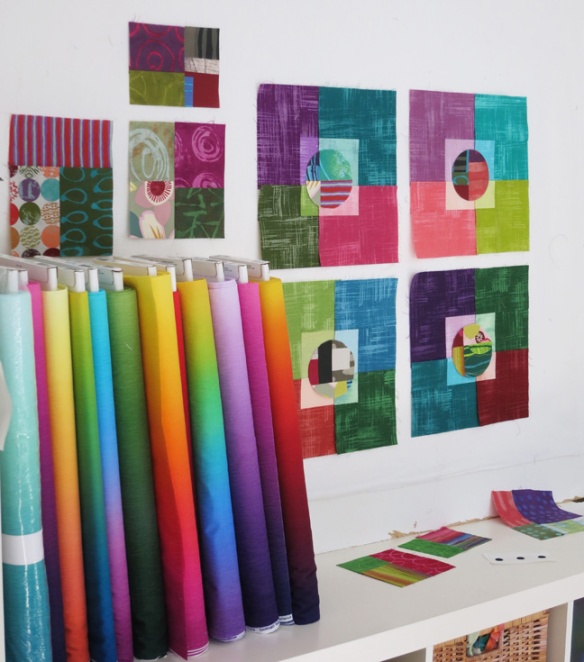 I started laying out the units to make rows, but I was beginning to feel that the texture and pattern of the Painter’s Canvas fabrics were a bit much. Also, I could see that a few of my inner fabrics weren’t light enough (look at the second row, second block from the left, the raspberry unit). What to do?

I began to make more units from my collection of Grunge fabrics by Moda. (Many of the colors are in my Store.) Their pattern is subtler than Painter’s Canvas, as you can see below, with Painter’s Canvas on the left and Grunge on the right. 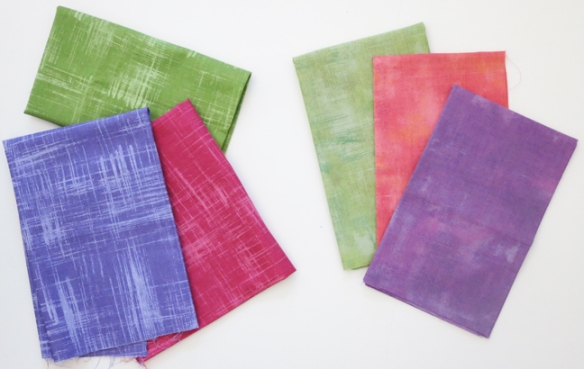 I made lots of Grunge units and auditioned them in rows.

Better, I thought, yet there was still the problem of some of the inner fabrics not being light enough.

Another possible solution was to “air out” the blocks with plain alternate squares. I like the black-and-white fabric (lower left) best because it repeats the black in some of the bonus circles; however, it’s very lightweight, more like lawn than a quilting cotton.

Then I decided to try blocks with four light fabrics that were similarly light, to make the centers blend into one shape and recede. 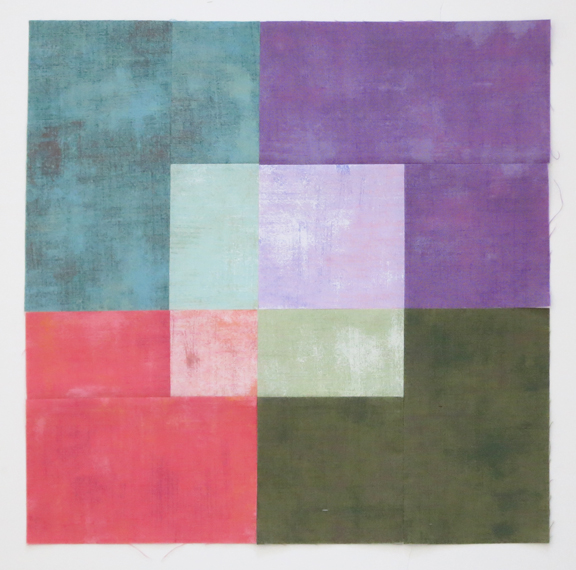 When I mocked up four blocks and laid the circles on top, I saw immediately how well the circles stand out against the lighter backgrounds. Graphic, but in a quiet way. And that’s where I am for now.

I’m not sure if I’ll set my blocks side-by-side or separate them with alternate squares. And I don’t know how large the quilt will be. It’s true: one thing does lead to another, and someday I’ll make a quilt from all the units that are still left over.

In my next “Christine’s Color Connection” newsletter, I’ll be doing a step-by-step tutorial on making the units, blocks, and bonus circles (I have a technique for making them from scratch). If you don’t already get my newsletter, you can sign up on the home page of my website, or text COLOR4Q to 22828 on your smartphone.

That’s it for now. I hope your summer is going swimmingly and that you have plenty of creative projects lined up. As soon as I post this, I’ll be back working on my samples for Zephyr. The countdown to the retreat continues. Cheers!

2 thoughts on “When One Thing Leads to Another”